As I contemplate whether to compete in the Muscle Beach Bodybuilding and Physique competition in Venice Beach California again; I thought it would also be a good time to share my story or should I say my Year Long Journey to last years July 4th competition.


Sometime in April 2017 I was talking to my cousin Clint Johnson and he challenged me to find and compete in a California bodybuilding competition.  He said, he and his wife Paulette would make it a California bodybuilding vacation. He wanted to show his younger cousin “How to do it”, he was feeling very confident after placing in a few East coast events; I could hear the bravado in his voice. So, I didn’t say yes at that moment; I needed to think about it. I knew what challenge lied ahead for me if I accepted his challenge! The weight training wasn’t going to be the hard part, I’m a health coach a marathoner and trail runner! Training and working out is part of who I am! But to lean down into single digit percentage body fat to show case lean muscular development was going to be the bear; the all-encompassing commitment day in day out to deprive yourself, to sacrifice. That was going to be the hard part; was I willing to go through that; in the past I had tried and failed. So, I said let me think about it and I will get back to you.  Participating in a bodybuilding or a physique competition was a bucket list type of event for me, so I started looking for events and began talking to Tanya about it.
Tanya was of course in right away, she told me she would help me and support me if I stayed committed. If you didn’t already know my wife Tanya was once a competitive bodybuilder, earning  the title of Miss Bermuda. She knew what it was going to take and how to get there! After a short search we chose the date of July 4th, 2018 the Venice Muscle Beach competition, the Mecca, the Birthplace of bodybuilding.
I called Clint and told him “I am in! let’s do this!” The date of July 4th gave us both just over a year to prepare, so no excuses, put up or shut up! We made a friendly wager, whoever placed higher had to buy the other dinner at a spot of their choosing. 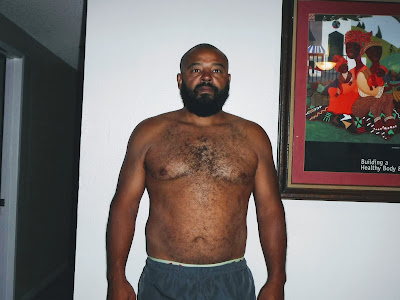 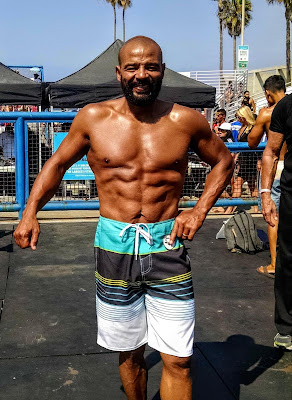 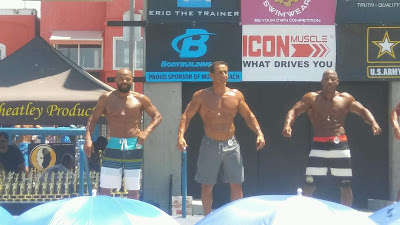 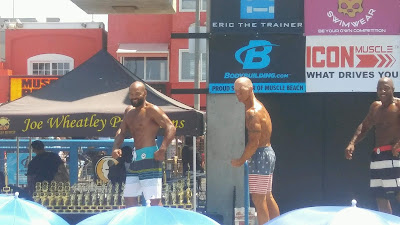 Clint and I about to get "Pumped" in the staging area.

What a day! What an experience! In my category there where six competitors; in the end I placed sixth, the top five were awarded. That of course was a little disappointing but it is all about size and peaking at the right time. I was as they say in bodybuilding a little "Flat" in the prelims. After eating during the break my body seemed to peak and "Tighten" up for the Finals; but my competition had a little more size and development.
Clint competed in a different category and age group than I. He was in the bodybuilding category (Over 50) with five competitors ;he walked away with fifth place. 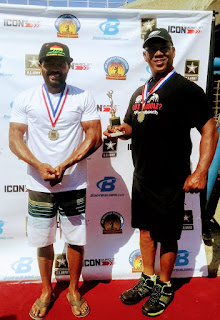 The next day we headed to a resort in Palm Springs for some fun and relaxation; which was well deserved. Clint paid for dinner 😄 wink wink. Vacation time! 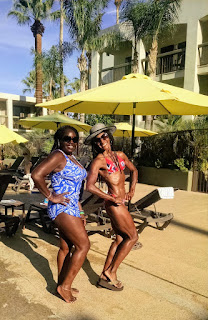 The Ladies showing off their stuff pool side! 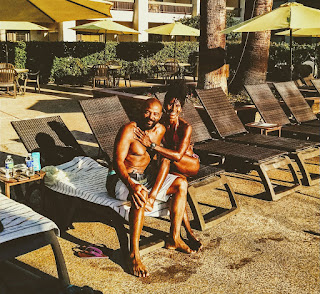 I couldn't have done it without Tanya's support, she is my Rock!

Time to get back to the drawing board. Work, train, eat, sleep in that order, then do it again.
MJ

Thanks on your marvelous posting! I seriously enjoyed reading it, you happen to be a great author.I will be sure to bookmark your post and definitely will come back someday. I want to encourage you to ultimately continue your great work, have a nice weekend! buy cheap Yogawear online